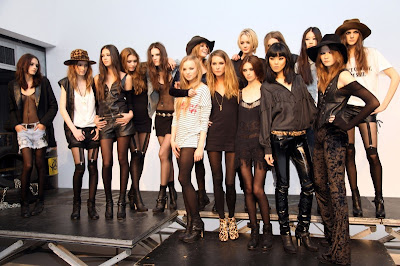 WTF? In fact so WTF that I originally typed WFT? THAT'S how baffled I am. What in God's name is going on here? First LiLo started wearing leggings aaaaaalllll the tiiiime. To everything and with everything. And often it just looked as though she had forgotten her pants. And then she brought out her own range of the things which is just, monumentally bizarre and I would prefer to gloss on that one. So then yesterday I was traipsing down Long Acre and saw a gal walking along and I almost stopped dead in my tracks. GOOD GRIEF I thought. The poor lamb, her skirt has ridden and she's flashing her gusset in such public a place! And then I realised that actually, she wasn't wearing anything that might even resemble a skirt. She was JUST wearing opaques with a plaid shirt. I could see her undercrackers Kerrina! THAT IS TOO SHEER A DENIER...surely?

What is going on? Why is it suddenly OK to sling on your tights and just, GO OUT? It's too too much man. Like, literally in a lot of cases. I can SEE too much. Larks lordy! And it must be a trend because my beloved Erin Wasson has put her own spin on things and is sending models out at RVCA with what can only be described as an overgrown pop sock attached to a granddad garter. If I see THAT outside H&M next week I swear, I'll get all Edwardian again and go clean in to a feint of horror.