Is it wrong that the only part of this sheer, gaffa taped nippled, metal basket woven shouldered ensemble that I actually disapprove of is....the shoe?

Addendum - I just found another picture of the jumpsuit. Is she wigging out? Otherwise I can't explain how she landed at Heathrow with pink tinged tresses and then rocked the white blonde 'n' bow do later on the same day. DON'T TELL ME THE BOW HAIR IS A WIG. JUST. DON'T. I need to believe that she whips that thing up as and when it's needed, not that it's hanging around on a polystyrene Gaga head when she's out of town. No!!

Here's the picture anyway. As she's in Blightly she has got her leather glad mits on a bit of dainty china. See? I sincerely hope it's neat gin in that cup. Surely The Gaga doesn't drink tea? Wouldn't that be a bit too, mortal? At least her actual boob is almost out which makes me feel a little more settled. 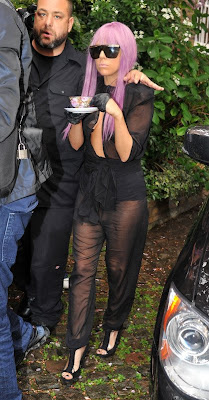