OK. So. I am just about recovered after the wedding. It was fabulous! The bride looked DIVINE, the groom's suit was a triumph (after a touch and go moment two weeks ago when an extra button hole had been added in error. YIKES! More of this later.) The Head managed to prove to everyone that he was wearing his kilt in the truest Scotch style by flashing his bottom at every given opportunity and I scraped enough time, after sorting out all the cakes, to sling on the jumpsuit and get some much needed backcombing done. (I was in fact teasing my barnet whilst sat in the boot of my car, waiting for the bridesmaids to emerge - every second counts man!) 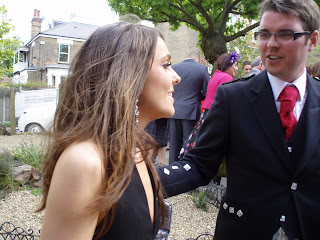 Whizza had been unable to find the perfect pair of nude heels (we thought they were supposed to be a trend but on Friday it was looking like the only place she could get a pair would be Louboutin). She had a mad dash down the King's Road literally hours before the nuptials and snagged herself a gorgeous pair in the nick, and looked heavenly. Elle was also debating what to wear until almost the last minute. Everywhere she looked people were trying to sell her frocks that made her look like a human gift (which reminds me I opted against the bow on top of my head, mostly because she and I had by this time spent so much time getting angry about bows I felt it was irresponsible and fickle in the extreme to then adorn myself with one). Anyway she looked fabulous too in the end, and then everyone got drunk and we had a rave. Complete with glow sticks. Two fell out of my father in law's suit pocket when we got home which was odd, but also brilliant. More to follow when I get more pics...!
Posted by Hayley at 17:07