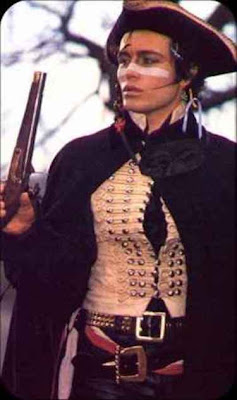 Fancy dress usually fills me with a kind of paralysing dread. Apart from the beaver outfit that The Head bought recently for B of BK fame's stag do, which I was just itching to get my hands on. I mean, it came with it's own reinforced tail for heaven's sake...what's not to love? But in general I LOATHE the very idea. Why can't we just go to a party looking, you know, hot?
BUT, it is one of my dearest friend's hen party soon, and so normal rules do not apply and I am happy to get into the spirit of the thing. The theme is 'musical legends'. I am dead set against any kind of dressing up in a sort of sexy way. You know, your Britneys, your Chers, the list goes on. It never works. One will always look a bit of a tit in these instances and I think it's best to embrace the silliness of it all that attempt to fight against it and ultimately lose...and in public too. Yeauch! So my first thought was do dress up as Beethoven. I fancied I might be able to pull off a pomandered hair piece nicely...but then I worried that it might be taking the theme a bit too far, and almost as bad as sexing it up is having to explain who you are for heaven's sake. So that's something I might shelve and revisit at another juncture (Angels, the saving grace whenever one may need to 'dress fancy' so such a wide range of Beethoven wigs it amazed me. Clearly I am not the trailblazer I first thought).
I'm fairy skintios so I had a trawl though my wardrobe and brilliantly, but also alarmingly, I appear to have every part of the outfit above. I am missing the hat and a musket, but apart from that I have EVERYTHING. Which after the excitement of only having to shell out about a tenner to complete the look worried me ever so slightly. I mean, is it a good thing that I evidently dress like a highwayman? Surely no?
Posted by Hayley at 18:22