You're pulling my leg 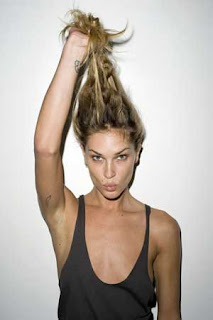 After feeling positively prudish once you deemed my idea of a short skirt to be entirely decent I was curious as to whether you felt it was possible to go too short. That question hasn't been answered as we are discussing an absence rather than a brief presence but I do feel relieved that you have limits. I might get upset if I ever saw you sans bottom half, even though I wouldn't doubt for a second your ability to carry it off. I know that I find Lady Gaga's apparent allergy to bottoms amusing, but she's like a cartoon character so surely that isn't a double standard.

I am totally in agreement with you, though, if its got a denier rating on the pack it needs something to cover the essentials, surely. I had been wondering if I was developing Victorian sensibilities with my harsh judgements of all the bright young things flashing their smalls at every opportunity. But you are too (though maybe Edwardian in your case!) so I don't feel so bad. I do wish they would just put it all away.

Miss Wasson is a huge disappointment as I had just fallen in love with an RVCA dress of hers. But now that I know she wants to dress people in a way reminiscent of the kinky Nazi lady in 'Allo, 'Allo I will have to reevaluate my burgeoning love.