What do you make of the brocade trend? It has been floating around for a while. I think Miuccia might have started it a few seasons ago. I have been quite intrigued by it but always felt that it was a little too Tudors and Stewarts for my liking. A bit ornate, a bit garish.

But I saw a girl the other day wearing a brocade Marc Jacobs dress. I was initially drawn in thanks to her having this bag slung over her shoulder which I adore. (Before you start shouting at me, no, I am not thinking of buying it.) 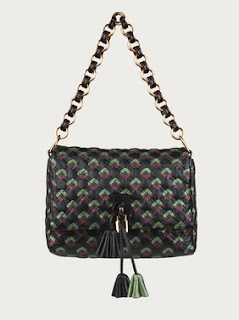 My instinct would then be to wear a plainer outfit to let the bag relish all the attention, but she was wearing a dress (this style, I think, but the colours were very similar to those of the bag) that almost competed with it. I didn’t know where to look. The bag! The dress! The bag! Oh, the dress! It was like the sweetest torture. 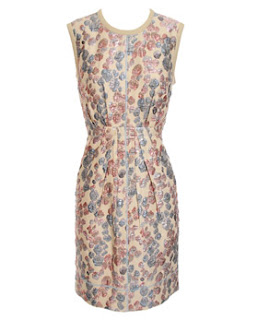 (Images via Browns and Net a Porter)
There were quite a lot of other fashiony people in the vicinity but she was definitely one of the most notable people there. I think she might have worked for Marc Jacobs, though, so that probably helps. Lucky thing!
Posted by Lucinda at 17:10