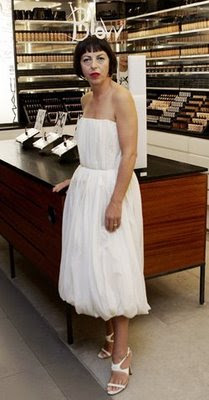 I am all for a hat. In theory. I mean if I had the budget I would totally do a Blow and wear a hat almost every day of my life. They suit me, I like them, where's the harm? But I think you really need to splash the cash to get a hat that's actually any good, and that you won't look back at whilst trawling the family albums whilst your grandchildren are gathered about your skirts and not actually recoil in horror, and start unravelling some sorry tale about a heinous identical sister Must Never Be Mentioned but is actually shacked up Rochester style in the loft of your four bed semi.....WOAH! Serious, sometimes my imagination just runs clear away from me...not even with me. Just alone.
The last time I wore a hat to a wedding (and prior to this I was quite the chapeau sporter don't you know, even at a tender age) was a white, floppy bloody straw number. For the love of God, who did I think I was, J-Lo? No. I looked terrible. (I also wore a belt that looked as though I had fashioned it out of jelly beans at the kitchen table...so now you can see why the identical twin story is already in my and ready to go). I looked fairly ludicrous and after about 10 minutes, but sadly rather a lot of photos, I realised and whipped it off, crushing it in my sweaty palm and pretended it was an over sized tissue to dab at my joyful tears. I still have it, and get it out every now and then just to remind myself not to do something like that again. I also bought a leopard skin trilby once which a pal clapped eyes on before I even got to wore it. She laughed so much I feared something might rupture and references to Boy George were made which will never be forgotten.
So, the moral of this terribly meandery tale is that unless you're ready to chuck some cash about then I wouldn't darling. Although you look utterly resplendent in that feathered number so perhaps you are to be trusted FAR more than I. In fact in light of that story purging above why am I even questioning whether you know more than me on this matter. Of COURSE you do.
Whilst we're here, can we take another look at the Lovely Ms Blow? If only I could get away with wearing a hat such as that at the wedding, with my own name emblazoned across my cranium I would so, SO do it.
Posted by Hayley at 21:52