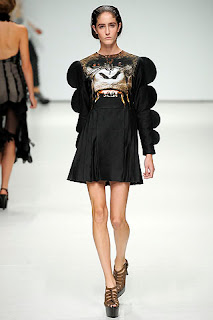 What the dickens is going on? It started off with Christopher Kane and it seems to be spreading. I am not in love with the idea of having a wild animal on my chest, and I can’t imagine that anyone else would be either. (I was about to make a cheap joke about that chap with the tiger attraction in Vegas, but I think we can all live without that.) 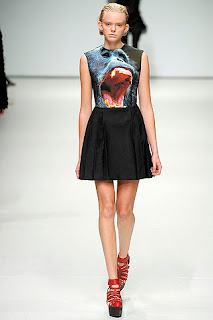 (Images via style.com)
The models don’t look that impressed about it either, although the second one just seems to be dreaming about the end of the show when she might well treat herself to three peanut M&Ms and a pack of Gauloise for lunch. 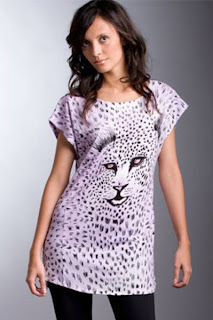 (Image via asos.com)
Now the high street has got in on the blinking act too. The leopard on this t shirt really grosses me out, you know actually makes my skin crawl, why would you want to wear that, people? Why?
As a caveat I would like to say how much I do love the rest of Christopher Kane's collection. The dresses with the circles are a dream.
Posted by Lucinda at 17:24