Ooooh! What a nice shoe! Well akshully it's not at all nice is it? It's nasty. NASTY SHOE! Don't wear it with this get up from Alexander Wang come Autumn/Winter though will you, or you'll look like some kind of kinky super hero. I say that as though it's a bad thing. It isn't necessarily but it might be Too Much for the office, you get me? 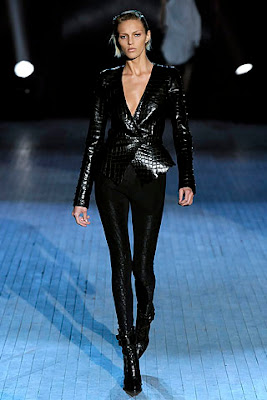 (Image via Style.com)
Oddly enough, whilst you're planning for the time when you can whip out the opaques with certainty again I am getting more and more excitable about the upcoming sunnier months. Perhaps I am being overly optimistic. Summer weeks is perhaps more realistic. (I am going to make sure I cram a whole lotta look in to those weeks sweetcheeks, let me tell you.) I am especially enamoured of things in this colour at the moment: 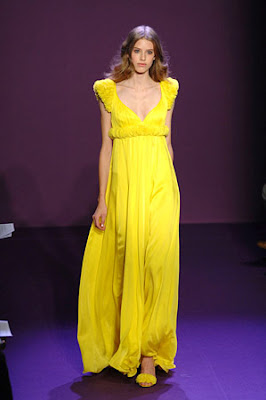 It doesn't really matter so much what the thing is, as long as it's this slightly acidy yellow. The fact that were I to wear that colour I would look like a nicely dressed cadaver is beside the point. In my mind I would look AMAYZINGALINGA!