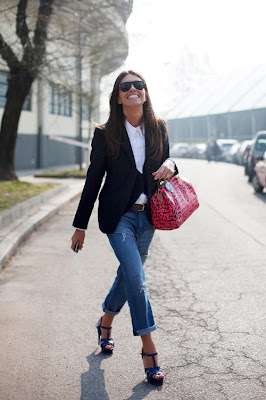 (Image via The Sartorialist)
Woah! It's one of those days! Hooray!! I absolutely adore that shoe. I almost bought them myself last month actually, I do like an Oasis shoe. They always look way better than average high street fayre. I decided against them because they were a more taupe than grey and I was being overly specific in my shopping in an attempt to curb my recently horrific spending.
But they're glorious so get them. And go go go on the white jean too. Mega! Weirdly, my disagreement with the peg trouser is over too. A colleague mentioned that I looked like a glamorous painted 'n' decorator last time I wore them. FOR REAL! My mouth gaped open and I shrieked 'BUT I'M WEARING A LIP AND A HEEL FOR HEAVEN'S SAKE!' to which he looked hurt and replied 'I did say glamorous'. Some PEOPLE!!
Posted by Hayley at 12:43