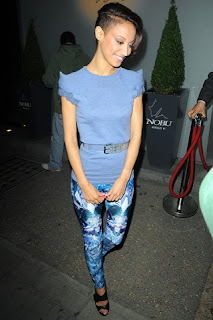 This is the other one from Sugarbabes. You know, the one who replaced the really scary one. I believe her name is Amelle, but only because that's what the caption said under her picture. I'm not sure that she has ever really entered my consciousness before. Except I think there was some to-doing about her ex-boyfriend being a nasty piece of work.

She has got my attention here though. God, is there is anything better than a really pretty girl with a nasty, mean haircut? And an undercut, as well we know, is the nastiest and meanest of the lot. I love it. I also love the Alexander McQueen leggings she is wearing, though I probably wouldn't recommend them to anyone else. So go to it, lady, nicely done.