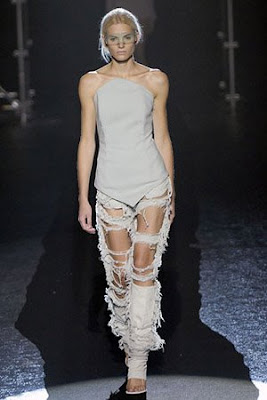 Now, funny you should bring up this shredding of denim. Only a couple of weeks ago I was looking at these bad boys by Margiela and musing about how lovely that model looks. Sort of edgy in a kind of ethereal way. She looks like an urban Titania! I really wanted some. I know it's wrong, but they do so appeal to the part of me that really wants to dress like the front man of an 80's hair metal band.

Evidently though you need to pay a lot of money to get suitably distressed denim. The stuff in the shops is just AWFUL, it's all too neat and precise. I asked my Mum to cut my jeans up when I was about 12 and I swear, her version looked more edgy. It's such a shame.

The thing that I find more worrying than the ripped jeans though is the ripped TIGHTS thing that's going on. I don’t geddit Kerr! They’re on teen leglets everywhere. I can't help but think it

looks slovenly and not all chic. (Apart from on Alice Dellal, natch.) And, I suspect some of the teens are MAKING THE HOLES THEMSELVES!! The world has gone mad. What on earth would Coco have said? Can you imagine?!

What I am hoping for is a revival for is the other trend assocaited with Bros. Do you recall? When girls started wearing actual Grolsch bottle tops on their shoe laces. Hahhahahaha. Hil. Arious. Seeing that happen again would put a Cat Among the Pigeons. (Arf!)