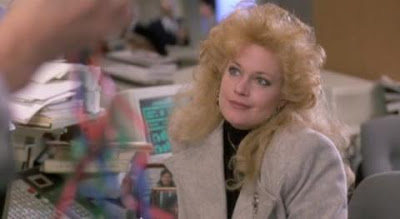 (Image via Invisible Magnet)
Dearest. It is the age old issue of the Public Transport Shoe rearing it’s head again isn’t it? If you are committed to sporting a heel and prize your posture it’s pretty much a done deal that you are going to have to lug a spare pair of flats around with you at all times but is it really enough to push us in to replicating Melanie Griffith at her flammable best as the mega coiffed typing pool darling?
Although the trainer makes me shudder it just isn’t cute to see girls stomping around in heels in discomfort. Or worst still, to spot someone doing that peculiar walk where they are sort of half lunging and half unable to actually lift their feet from the floor because their heel of choice is too damn high.
I have had it with the ballet flat as a viable PTS option. They do fit nicely in a handbag once off, but they also tend to grow at such an alarming rate of knots that I always find my feet end up flapping about inside them after only a few weeks’ wear. In the last pair I had , I needed to get up to almost warp speed just to generate enough friction to get them to stay on, damn it.
At the moment I am putting all my hopes in a quasi moccasin. I look like a preppy, goth’d up Pocahontas. I’m not telling you this as though it’s a good thing, but it is not as blatant as a training shoe (tell me, tell me, tell me that you are NOT wearing yours with an opaque darling or we are really going to need to talk.)
The sort-of-moccasin is not without it’s faults. I’m unsure how to even describe it, and that can only ever be a bad thing. I was dreading to think what you’d say if confronted with them en route somewhere. I imaged your eyes might swivel to the back of your head or that you would be gripped by convulsive laughter. But now I know you’re Melanie’d up I’m not so worried. And as long as we only look crap whilst in transit and then fabulous it up at either end of our journey I reckon we’re in the clear.
Posted by Hayley at 16:01