Weirrrrrrdly I was going to post the exact same...thing. What do we call that? Is it actually a coat? Mine wasn't going to be quite as eloquent as yours though darling. More along the lines of 'HAHHAHAHAHA WTF?' It's a bit of fabricy weirdness isn't it?


I find the sleeve a little, hmm, Flash Gordon. I always feel as though I might take off with an overly voluminous sleeve. Actually that isn't the sleeve is it? The whole point of the post is that its' bloody sleeveLESS. I mean the bit at the top that would mother the sleeve. What is that called? Well an over zealous that bit unnerves me. Another t 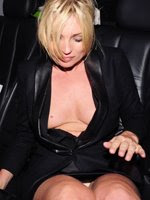 hing that I find irksome that is a feature of this whatsit is the wearing of a leather(ette in this case I presume) belt on a coat. An adorably belted trench is one thing but slapping on something that should hold up your jeans is odd. The amount of ladies I've spotted that have taken their great big butterfly belts from two summers ago and whipped them round their winter coats...it makes me feel shuddery.


I'm so pleased to hear that you have seen a mortal working the LOOK NO ARMS!! coat (that woman sounds dynamite-ish!) and I agree that perhaps we should be open to losing bits of our outfits to add a quirky new sartorial slant. A sleeve is one thing but let's not make like Kate Moss who appeared to have lost her tshirt/bra/mind the other day. I doubt anyone would bat an eyelid if I went for that but the world would be in a whole lotta touble if you did missy. Can you IMAGINE? Kerrping!
Posted by Hayley at 17:42