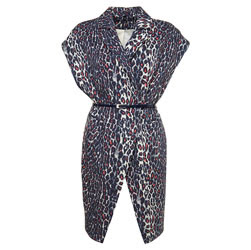 The other day I was perusing the old internet, as you do, when I found this. My initial reaction, other than it being the sort of thing Eartha Kitt might have looked delightful in as she joyfuly seduced/petrified a far younger man, was WHERE ARE THE RUDDY SLEEVES? Followed closely by - what precisely is the use of a coat without them?


And then, as if in answer to my profound doubts, a delightful lady decided this morning to show me just how wrong I was. And then terribly kindly positioned herself in front of my eyes just when I was looking around and paying attention, rather than when I was attempting to mow down dawdlers on Regent Street on my way to work as is usually my want.

She wasn't wearing this item above, but she was wearing something that slightly confused me as to its identity. It might have been a coat. It might have been a dress. But I can say with 100% certaintly that it was enchanting. It was quite a thick tweed, and double breasted and slightly longer than knee length, and had military style buttonage down the front, and was entirely without a sleeve. On either side, no less. Honest! No word of a lie! She was wearing a smart trouser and heeled boot and white shirt underneath it, and I can't remember for sometime seeing anyone who looked quite so good. She looked AM-AY-ZING!

So I say, to hell with sleeves! It might almost be warm enough in a month or so to say farewell to them and I say good riddance!

As to the other item, probably best left to Eartha's memory don't you think? I agree. 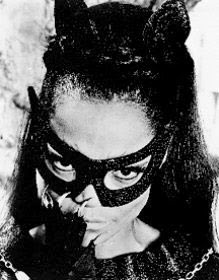