In the Snood for Love 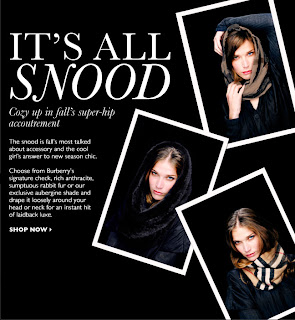 I once had an American boyfriend. Inevitably his name was Ryan. He was something of an intellectual but surprisingly (for most intellectuals I know are depressed and disconsolate) he was also an unabashed optimist. His favourite phrase was "it's all good!" and he genuinely meant it. I also used the phrase but it was always laced with irony and a grimy hard won cynicism and I rather suspect it might have rained on his parade somewhat. I think the good people at Net-a-Porter have been hanging out with him, because I assume that is where they are going with their headline, even though it doesn't rhyme. Or am I again being terribly English by assuming it rhymes with booed? 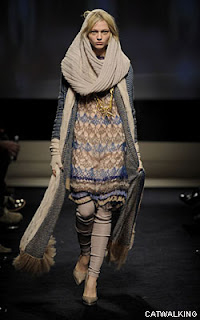 But honestly the question at hand is, is it all snood? I remember my mother had a mint green snood in the 80s that matched a mint green ski jacket. I coveted both of them desperately. And I'm sure that on the slopes she was quite the envy of every snow bunny in a five mile radius. But it was the 80s and things have since moved on. 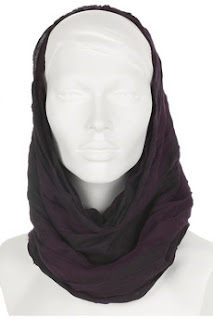 When the suggestion of a snood was first touted a few weeks ago I thought it would take some feat to convince me of its merits, but with this little Burberry number I actually could imagine myself giving the trend a bash. Is it a mistake to even dally with such a suggestion? 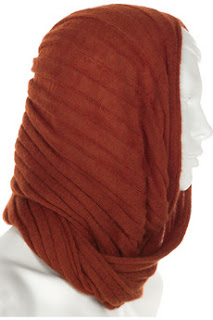 (Images via Net a Porter)

This Missoni version, however, makes me think that the poor mannequin, maybe after a heavy night out, has mistakenly wrapped a damp bath mat around its head and the musty aroma has not yet aroused its suspicions as to the severity of the situation.
Posted by Lucinda at 15:25