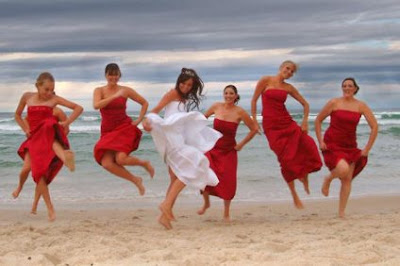 (Image via 1st Class Invitation Inspiration)
Dear God! Who's idea was this? Novelty, kooky, spontaneous wedding pictures are surely never a good idea. The lady behind the bride looks particularly hesitant with one foot just barely off the floor. Although I would probably rather be her than the girl on the bride's left. She was probably captain of the school hockey team. It was probably her idea. She looks like she's been practising.

Plus more proof (as if it were needed) that matching bridesmaid dresses are just hid. So well done her for choosing a more discerning option. Will you all have to wear the same colour? Or just something that goes with what she is wearing?

I like the first dress, although it reminds me somewhat of this which I didn't love so much. But it is much, much cuter. And I love the thought of you getting your stems out.

As to the others... honey, you've had your own special day, maybe you shouldn't try to be the main event, huh? Or try to blind people if a stray sun beam strikes you. Just a thought.
Posted by Lucinda at 10:06