Mad as a Box of Cheetahs 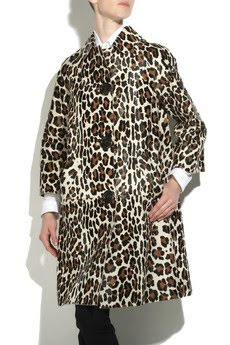 I know it is only August, but I read something recently that said that most of the good winter coats are bought in August (admittedly it was probably written by a retailer to enduce a shop-bound panic - guess who's fallen for that. Fool!)
So anyway, I thought "What the hay, I'll look at Net a Porter." Well, actually I looked at To'sho' first but there really wasn't anything of merit there in the coat department. So while I was on Net a Porter I was surprised to find that at the bottom of the first of two pages of coats we were already into the thousands. So I questioned how much would the most expensive coat be. You know, just for larks. Don't tell me I don't know how to have fun.
And do you know what I found? Well, you probably do. The clue is probably as clear as the nose on your face. Isn't it? So, yes, you are quite right, it was the calf-hair cheetah-print Michael Kors balmacaan (a loose single-breasted overcoat, apparently) that you see above. And the cost?
£11,695.
I kid you not.
Recession? What recession?
It's not even cute.
Posted by Lucinda at 14:04