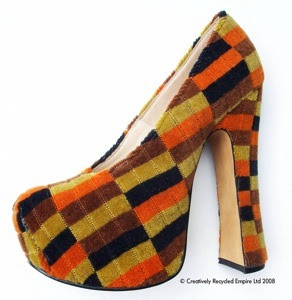 It is very Westwoodian isn't it? I think it's horrible. I don't like an overly feminised suit. I thinks it's all a bit Dita Von Teese (tell me I'm not the only person who wishes the woman would just sling on a t shirt every now and then and relax. I'm sure that being that trussed is ageing, for real!). And you're right the fabric is hid. It reminds me of something TFL might use for seats. Now, I hit you up with a fact last week and now here's another...TFL have a special name for their seat fabric and that word is 'Moquette'. Seriously, I didn't even know I KNEW so many facts. I might have a book in me! And there I was thinking it was going to be a lenthgy and sequal friendly tome, and instead if I pen anything it will carry inanities such as this. Gah!
Weirdly, I found these Westwood shoes covered in a bit of tatty old m m m moquette that has held possibly millions of bottoms, breathed in too many farts to mention and been sullied in other unmentionable and revolting ways. Nothing better than use it to cover a perfectly reasonable shoe! 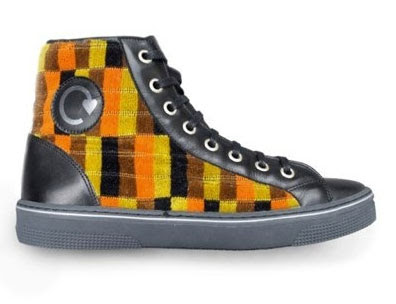 (All images via Pretty Portobello)
HO! And there are more. There is a company called Above and Below who make these utterly revolting trainers using fabric from bus and tube seats. Is there no end to this? I'm all for a bit of eco chic but when would this ever seem like an appealing idea?
Posted by Hayley at 14:00