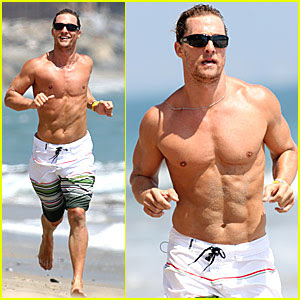 Am I alone in hating to see a man without his shirt on in an urban environment? At the beach? Fine. But in the city? Eeeugghh!

I don't want to see that much of you. I don't know you.

Even if you have a beautiful body.

Like if you are a runner. And you are running. With your shirt off. I don't need that in my life. I think I might be alone in this though, as when I made my opinion known while on Clapham Common I was quickly silenced as everyone strained to get a look at the half naked runner who had prompted my remarks, with one particularly excitable lady yelling "you're hot!" as he sped passed blisfully unaware (or aware).

I wonder if I am becoming old fashioned and fusty, like when I realise I am the only person who writes my appointments in an actually physical diary made of paper and who thinks that eating in the street is disgusting.
Posted by Lucinda at 13:39