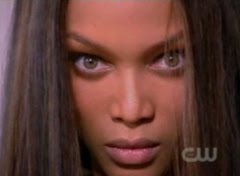 Hhaahaha! WOMANITY!  I love that so much.  It made me smize man!

Nice flats btw.  That much money is alright as long as they don't grow like shoes of that ilk do.  Why do they grow?  Like old mens noses and ears, they just carry on and on until they're all skew whiffed.  STOP GROWING! Arrêter maintenant you little bugres!

Anyway back to Thierry...what is with that chicks mental headpiece top right?  Top left is a bit crackers too but serious - that looks HEAVY.

EDIT: GOD DAMN!  It's the same hat as the bottle is wearing.  I am SO off to Superdrug to get a whiff of that bad boy.
Posted by Hayley at 12:55