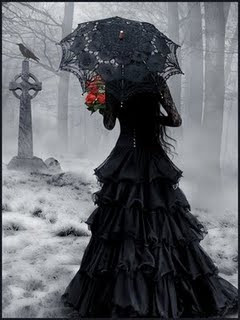 Terribly sadly one of my bosses has died. I worked with him for three years and I was wild about him.

He loved that I wrote a fashion blog, that I wore totally innappropriate things to work (even though he might have rolled his eyes at the same time) and that I wasn't a conventional PA type. We talked about fashion, mostly disagreeing about the merits of slip on shoes for men (in my mind there are none, but he travelled a lot and thought they made sense for going through airport security), the theatre, travel and in between I organised his work life and kept him happy.

We got on like a house on fire and now he has gone which breaks my heart.

His funeral is next week and (oh so superficially, because of course in the grand scheme of things it doesn't matter a jot) I'm wondering what to wear.

All black seems so dour, but no doubt appropriate. I'm thinking I might feel more comfortable in navy instead. Still sombre and appropriate but not as "I'm at a funeral". I don't know why that matters, but it makes me feel slightly uncomfortable somehow.

But now the tricky part. I also want to wear a little something that nods to his amusement at my crazy outfits. Something that would make him chuckle. But also something that won't draw attention too much or cause offense. Maybe a jewel or a shoe with a little quirk. Nothing too much but just enough to make some tiny last connection with him and remember him in a way that is totally personal to me.
Posted by Lucinda at 12:22