Annie Are You Okay? 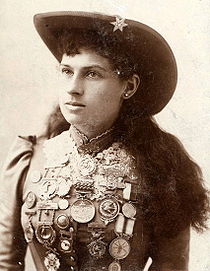 Oakleys always make me think of Annie 'Super Sharp Shooter' Oakley. As in, ‘Annie! Get Your Gun!’ ‘Quickly! Go And Get It! Whaddya Mean You Don't Know Where It Is? Where Did Ya Leave It? Well I Know If You Knew That It Wouldn’t Be Lost But...Well… I'm Only Trying To Help Annie, Geez. It's Too Late To Get Your Gun Now Anyway, Nevermind.' She would have looked really silly in a pair. They would detract from her splendid display of décolletage hardware.

You don’t adorn your bosom with medals (as far as I’m aware) so that’s not an issue for you. I'm not adverse to an Oakley if you are a person who DOES SOMETHING. Like you're going to be doing. Or like this adorable pair: 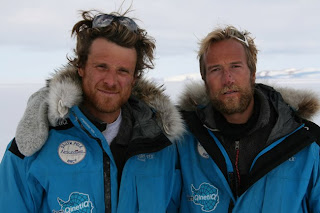 (Image Via Ben Fogle.com - which I will now be checking on a daily basis)

Have I ever told you how much I want to be Ben Fogle's friend? James Cracknell is OK too but Ben's just great. He's so nice, and funny and...nice!  And I think they have wraparounds on in this picture and it's fiiine. Get them. You see!  They are both doo-ers, you're a doo-er...it's fiiiine!
Posted by Hayley at 18:26