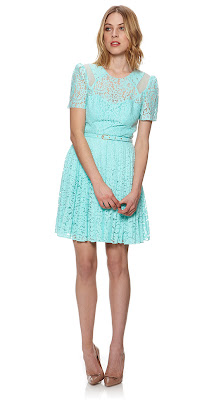 So it is nearly here! The wedding of my lovely Kate. And while I know I should wear something I already own and save my hard-earned I obviously want to buy something new.

I was lured into Whistles by this dress yesterday. And I had such high hopes. It is pretty, a skirt shape that would work for me and an interesting colour. It is almost a bit Christopher Kane, no? And I really like the little chiffon sheer panels which make it a bit more modern.

But there were two drawbacks.

Number 1: There were two other girls trying it on saying "Oh, I'm going to a friend's wedding". And honestly if there is anything that makes the hairs on the back of my neck stand to attention it is the prospect of wearing the same dress as someone else. You know, someone else who is there, not just someone else in the world ever. Who do I think I am? Daphne Guinness? Anyway, but as if that wouldn't be bad enough you would be wearing turguoise lace the same as someone else so it's not as though you could blend in and pretend that it wasn't really happening.

Number 2: It made me look completely insane. Like those Japanese girls who dress up like life sized dolls. It was just way too cutesy on me. I imagine with dark hair it might work better. But with my blonde and my big eyes I just looked like I was trying to regress back to childhood. And now that I am back on the look out for hot men I'm not entirely convinced that's the look that's going to reel them in.

So... long story short? I'm still looking/not looking, happily wearing something I already own... See?
Posted by Lucinda at 14:24