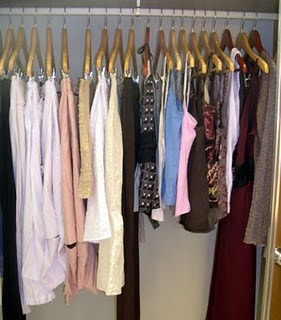 I have too many clothes. I know this. I know that I probably could have put down a deposit on a flat (although in London, maybe not) with the amount that I have spent on shoes and clothes and handbags.

I'm not particularly proud of this.

Especially when I struggle with the amount of stuff I own on an almost daily basis. I'm the kind of girl who can only ever be tidy if everything has its own home. If it doesn't it will invariably end up on the floor. Up until the moment that I go completely insane and swear that I'm going to throw it all out. This weekend was one such moment and I was pretty brutal, and took a full bag to Sue Ryder. But it was probably less than 1% of the wardrobe's total.

But the concept of the capsule wardrobe is one that is utterly lost on me. Classics? Neutral colours? One of everything?! The idea that everything has to work with everything else? Aaaarrrrggghhhhh!!!!

But honestly, where I find myself currently, something's got to change. I read an article a few weeks ago about reducing your wardrobe to 20 items. I counted my dresses (admittedly the item of clothing I wear above and beyond any other) and I have over 40. And if I counted my leggings, vests, t shirts, shirts, trousers, jeans, skirts, jumpers, coats, jackets I would be very surprised if it came to less than 200. That's a lot of clothing, no? In fact, one might say, far too much.

So I'm going to give myself a project and sort this out. But I like variety, I don't have a signature style per se. I suppose feminine, cinched-waist and slightly quirky would be as close as I could come to summing it up. I don't want to be pigeon-holed, stuck with one look, but I also need to stop drowning under a sea of pretty, pretty clothes.

I'm sure there is a way to have statement pieces that aren't boring and neutral and classic but maybe a smaller number of them than I currently have.

Mission number 1: Only buy clothes that I really love.

It's going to be tough, I have no doubt, but the time has come.
Posted by Lucinda at 17:12