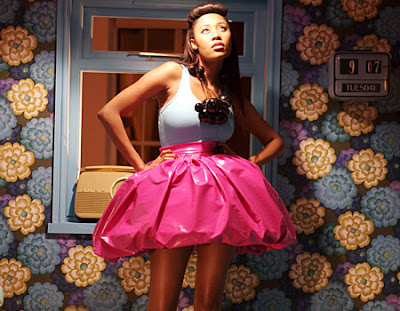 I am not a fan of VV Brown, no. I don't actively dislike her, I just find her tiresome. And the reason I find her tiresome is that silly rolled fringe thing she does. When she first hit the scene there was an interview with her in some glossy or other where she declared that she would take the secret of how she perfects that retro roll to the grave** and implied she was terribly clever for being able to get it up there in mere minutes each day. Which irked me. I'm not sure why, but it did. I think being told that I would never find out her hair styling secrets got my goat, because it implied somehow that I was literally itching to get rolling my own tresses. Which of course I am not. And that kind of Geldof Girl 'confidence' gets my heckles up.

Anyway, I digress. (I thought that was worth an explanation though and I have since seen her interviewed in the real and she seems terribly bland and inoffensive so perhaps some journo was just clinging on to the one defining factor about the girl and trying to tease something vaguely interesting out of it, I don't know.) I was as surprised to see her in that ad as you though. I mean, random! But at least that God damn roll has gone (probably because the hair stylist on the shoot couldn’t POSSIBLY work out how it might be done, the mystery of The Roll being equal only the mythical qualities of like...unicorns and shizz). I think she looks all the better for it. She is much more attractive without that thing lying dormant across her upper frontage.

It's Dannii Minogue I'm not happy about. Good Lord that WOMAN. She does things like this:

W. T. F?  Why on EARTH she and her sister are heralded as mavens of style is something I will never, nor would I want, to understand. Perhaps the people who have declared her a style Queen have been practicing their VV fringes whilst watching X Factor and whilst peering through their coiffure, have got her mixed up with Princess Cheryl. It's the only explanation I can come up with.

* ...are all available from VV Rouleaux, which is by far, a more preferable concept to VV Brown.

**Perhaps not to the grave, I may have exaggerated in my pique but she was clear she would not be forthcoming with the details.
Posted by Hayley at 14:00