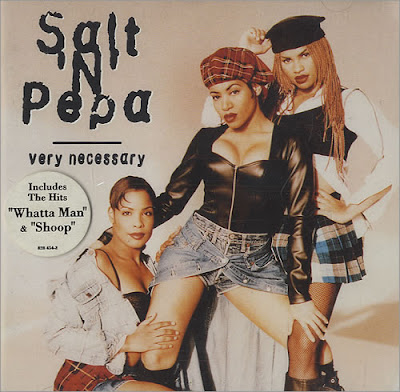 Word! It's me! Here I am! I loved the story about the Rude Girl* and I had to post. That's HILAIRE. I tell you what though, if you're dressed like Salt N Pepa and Pushing It and Wanting to Talk About Sex next time I see you I shall sit you down and have a word, but until then, carry on with your high tops! In my mind's eye I just can't imagine this renaissance moment that you're having but you know, it sounds tremendous.

1. I loathe those cut out frocks too. They are everywhere and you're right they are for nippers and no one else.

2. I bought a denim DRESS the other day. Hmm. It has a flared skirt and turn uppable collars. I'm not sure what came over me. I had a similar vision to your about the bicycling and plimsols etc etc but I can't get over the fact that I feel like Doris sodding Day in it. It shall be returned.

3. Eva Herzigova freaks me out a bit. I'm not sure exactly what it is, but...I don't want to talk about her.

4. THAT DRESS SOUNDS AMAAAAZE! I have been quietly hoping for a revival of the Versace of the early 90's for ages. I had some leggings like those in that ad when I was 13. They were from Debenhams and I was young and still hadn't worked out that it was pronounced VersaCHEEE not VerSACE but I wanted IN to that glitzy fancy world. I wish I still had them now. The Head would Freak OUT if I threatened to wear them out, and I live for moments like that. I like the boots even though you don't find them perfect.

5. Miley Cyrus? NEXT! The Hollywood Startlet I am loving today is Jess Simps after that oddly pointed creature Jonathon Meyer said she was 'Napalm' in the bedroom. Bam!

6. The Kurt Geiger's are gorge but won't go with your bad girl rapper image darling, think twice before you commit.

* I mean Rude as in Ruuuuude 'cos I am well street, innit.  But actually, if she pushed you she sounds as though she was quite rude in the traditional sense of the word also.
Posted by Hayley at 13:39