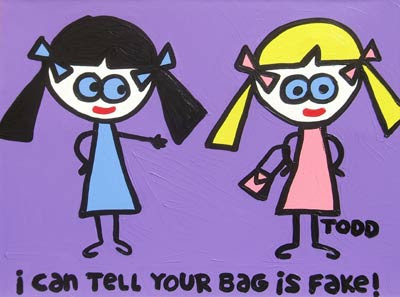 You are, of course, quite right about the red soled shoes. Surely when something is so much a part of a brand you would have to be a fool to tout your tat, relatively speaking, with such an instantly recognisable defining feature. It saddens me that Mr. Louboutin has been made so bereft by the theft of his sole.

Do you think people buy these shoes in an attempt to fool people that they are more affluent than they really are? Because when they are paired with a Topshop dress on a young pup, is anyone fooled?

It reminds me of people carry designer bags when the rest of their outfit is so decidedly mundane in comparison. I saw one such example yesterday, a woman with a quilted Miu Miu bag worn with a burgundy quilted nylon jacket. I ASK YOU! WTF?!

If your bag is real it begs the question, why are you cheapening it with horrible clothes or have you bankrupt yourself to such a degree (both fiscally and intellectually) with the purchase of said bag that you can no longer afford any clothes that aren't entirely hideous? Spend your money more productively and buy some decent togs. And if it isn't real what exactly is the point of paying for a badly made knock off that isn't going to hoodwink anyone?