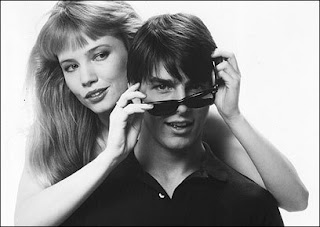 As to the blazer, I don't know if she even wore one, but it just reminds me very strongly of Rebecca de Mornay in Risky Business. And unless I'm very much mistaken she was a lady of the night, a scarlet woman, a street walker, a doxy, une fille de joie, a stumpet, a floozy, a harlot and a tart. And probably worse than that I imagine she would have worn it with nothing but a red lacy teddy underneath and pointy red leather courts. [Shudder!] And then would have seduced Tom Cruise on public transport. There is nothing appealing about that, surely.

The only way that a blazer of those dimensions looks charming is when it is an actual man's and he has draped it over your shoulders at a black tie do, to suggest that his freezing pecs are but nothing in comparison with yours.
Posted by Hayley at 13:49