I saw a lady this morning on my way into work wearing a pair of over-the-knee high-heeled platform boots. She looked very sexy. You know, kinda inappropriately sexy for the day, and for a work-based situation. 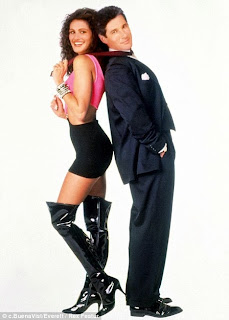 In fact, I imagine that is why said boots are now called over-the-knee rather than the decidedly racy thigh-high. Which was much more salacious, wouldn't you agree? Much more suggestive. Over-the-knee, in comparison, sounds positively demure.

Not to suggest that the lady I saw looked like a happy hooker. (For one thing her boots were much nicer.) I'm sure her morals and choice of employment were unquestionable. In fact beyond her face and hands there was absolutely no flesh showing whatsoever. But even so the look was inherently sexy. They just can't help it, those naughty boots.

Now a funny thing has happened with boots over the last few years. It used to be all about the knee high, then the ankle muscled in and became the king of the castle, and in my mind it's rule has never been rescinded.

However, with variety being the spice of life and all I would quite like to mix it up a bit. 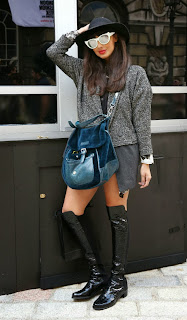 The boring old knee high boot doesn't excite me, and the shoe boot is really just a sweet little imposter, I'm sorry to break it to you darlings, but you aren't really boots.

So there is really only one option. What can that possibly be?! I hear you say. Well hold on to your hats because I really am suggesting the over-the-knee-er as a viable alternative.

I know that Jameela Jamil is flashing rather a lot of thigh here, and obviously that is still rather saucy. But wack on a pair of opaques and I think this flat Russell & Bromley pair are rather fetching. 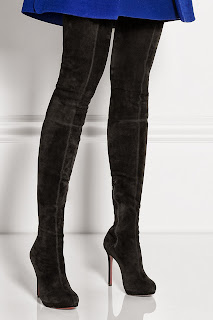 But shall I tell you what I particularly love about the possibility of rocking a pair? While with thigh showing or with a very short skirt the look still screams sex, with the ladylike look and especially with a full mid-length skirt the silhouette manages to balance the prim and the suggestible. Which I think is a rather nice interplay. The risk of looking a little too grown up or dowdy is instantly negated by the sexiness of the boot. So for those worried about being kerb-crawled but want to give it a go wear your boot high and your skirt longer and observers will have to imagine just how far up they go. Sexiness in the mind is far more intriguing than having it all out there. Wouldn't you agree? 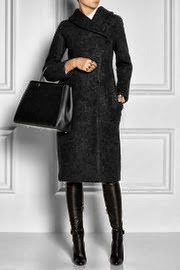 (Images via Entertainment Wise,  Net a Porter)
Posted by Lucinda at 15:20