Let Me Hear Your Body Talk 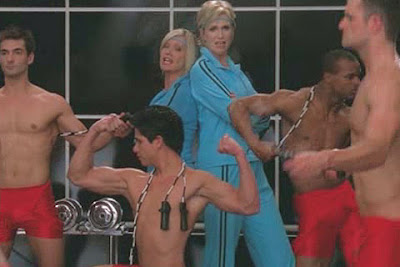 I have a confession to make. I am borderline obsessed with the Olivia Newton-John song, Let's Get Physical. I blame Sue Sylvester. Did you see that episode of Glee? Well, it was possibly the best thing I have ever seen on tv. Honest to God.

You know there are songs that just run through your head when someone says something? (I had no end of trouble with Do You Know the Way to San Jose? when I lived in Santa Cruz.) Well now I have it with Let's Get Physical. It is so tragique. I particularly like to swap in the word quizzical, if there are any question and answer-based shenanigans on the horizon. I know! Ha! Ha! Hilarious! But honestly, it's like a disease, I just can't help myself.

So when I thought about my next post the lyrics of the aforementioned song ran for the umpteenth time through my head.

So anyway, after an enormous digression, to the point in hand... 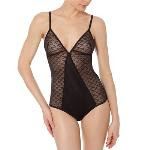 I bought this from Princesse Tam Tam.

I think it is awfully pretty.

I'm not sure exactly what it is. By all accounts I have the following options:

Too 90s. Too many thoughts of mum jeans and scrabbling around at a ridiculous angle in public toilets wrestling with the snaps. Not sexy.

2. Camiknicker
They combined a camisole and a knicker, so why not combine the words too? Clever, eh? But somehow sounds a bit Victorian. Again, not sexy.

3. Teddy
Makes me think of romance novels and racy affaires carried out not that illicitly by Jackie Collins characters. Hmmm, a bit cheesy maybe, but at least we've switched into the sex factor.

OK, so problem one solved, now on to problem two.

Is this item just for the bedroom, do you think? Or could it be worn under clothes. Unseen? Sure. It would add a little frisson while out and about. But what about seen? Under a jacket for example? Would it be too much? And would I actually start to look like a Jackie Collins character? Would I need to change my name to Lucky and become and uber-bitch? (What's that you say? Not too much of a stretch...? Well, that's not very nice.)

Any thoughts on how this item should be worn? And in what context?
Posted by Lucinda at 13:43