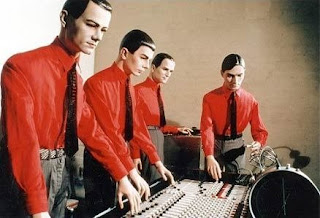 Oh Jil, I thought better of you. What a shame that you have let yourself down so unreservedly.
Those shoes look as though someone with a perfectly nice, if slightly conservative black shoe, has fallen foot-long into inconveniently positioned wet cement laid without a second thought to erecting a warning sign. Then, after being agressively impeded from removing it until set hard for some reason, a kind passer by volunteers his services with some sort of heavy duty power tool (I am assuming here that ear defenders would be an obligatory part of the ensuing mayhem) leaving sharp, clunky hunks of cement at the bottom of the poor woman's pegs. Bereft by the hideous state of her shoes she knows she must leave her former life behind her, realising that the only option now open to her is to start an all female Kraftwerk tribute band by setting a similarly cementy trap for other poor unfortunates.
I'm guessing that isn't what actually happened. Maybe poor Jil just fell and hit her head. Badly.
Posted by Hayley at 14:58